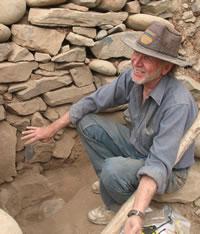 Retired, my wife and I divide much of the year between Mexico and Perú.

My research programs should be winding down, but a series of unexpected discoveries has them expanding with each field trip. They are in an area of archaeological investigation new to me in 2004, archaeoastronomy. In that year we excavated the first temple with astronomical alignments at the site of Buena Vista, Perú. The excavations were designed to test a political-economic hypothesis of coastal/mid-valley interactions at the time, 2,000 BC, when monumental architecture and large sites first developed in the Chillón Valley. In 2005 we excavated a second temple, in 2007 a third, both with additional astronomical alignments. Since then, pedestrian survey has revealed a large number of complex alignments, many with multiple reference points, some reference points themselves describing another alignment. Continuing this work at two other sites on the ground, we found rich sets of alignments in two other sites of similar age. Google Earth reveals that most early Peruvian coastal valley sites may have similar alignments. See links to publications in Spanish and English below.

A second unexpected discovery was that Colonial churches and missions from Texas to Perú often were architecturally aligned with astronomical phenomena. This lost knowledge was first rediscovered by Rubén Mendoza in California. Domes were designed to cast lights that trace the Meridian on the equinox in a number of churches in San Cristóbal de las Casas, Chiapas, as well as illuminate the south entrance on the summer solstice when a south entrance was present. Further, a beam of light that only that day fully catches the gold top of the pulpit marks the Maya crossing-day, a still important time midway between the solstice and equinox. In Lima, the December solstice in a very early and intact church, San Pedro, is marked by beams of light that trace the steps up to the altar to form a circle of light on it, as do some churches in Chiapas. This knowledge has been lost; recovering it has become my main investigation when in Mexico. A link to an early report on the Chiapas churches in English can be followed below.

A third unexpected discovery is the finding, as of 2010, of effigy mounds of all sizes associated with Late Preceramic sites.