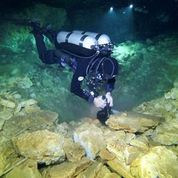 Dr. Brandi MacDonald, Assistant Research Professor in the Department of Anthropology and the University of Missouri Research Reactor, is the lead author on a new article , “Paleoindian ochre mines in the submerged caves of the Yucatán Peninsula, Quintana Roo, Mexico”, published in Science Advances, a prominent scientific journal. Dr. MacDonald’s research discusses Paleoindian mining of red ochre in the Yucatan peninsula. The Paleoindians were hunters and gatherers living at the end of the last ice age that hunted extinct megafauna like mastodons and ate easily processed wild plants like nuts and tubers. The research documents the earliest known example of ochre mining in the New World, dating to the end of the last ice age between 12,000 and 10,000 years ago. The ochre was mined from three caves (Camilo Mina, Monkey Dust, and Sagitario), although the research focuses primarily on the Sagitario cave system, which extends more than 7,000 meters (4.3 miles) underground. Evidence of human activity in the cave includes debris and hammerstones from the ochre mining, fire hearths, and rock cairns and broken stalactites likely used as navigation markers in the dark cave. Light would have been a significant issue for the miners given that the nearest natural light was 200 meters away at its closest and more than 500 meters away for much of the mined area. A series of fires helped light the way to the mined area and provided light for the workers. (Charcoal from these fires is what allowed the mining activity to be dated using radiocarbon dating.) The miners also enlarged certain narrow passages in the cave to allow easier movement.